I presented a poster at EWEC 2004, about flow distortion about a meteorological tower. The notes made after the conference follow.

The conference took the form of four parallel sessions, these were entitled Business and Policy, Scientific, Technical while the fourth session was a workshop. I attended the scientific and technical sessions mostly. There were four 1.5 hour lecture periods per day.

There were several themes that ran through the conference discussions.

The Continuing Expansion of Wind Energy

The first was the continuing rapid expansion of wind energy. In Britain, for example, the 2010 target is for one sixth of all British homes to be powered by wind (Patricia Hewitt, Secretary of State for Trade and Industry: opening session). The British Wind Energy Association predicts that the total installed wind power in Britain will reach 7500 MW by 2010 representing an investment of GBP 7 billion over the next six years; this is about an eight-fold increase on the currently installed 885 MW. The European target is that renewables will provide at least 21% of the EU electricity requirements by 2020. Milton Hernandez of Shell WindEnergy quoted a conservative Shell scenario where one third of Western power is sourced from renewables by 2060. The consensus was that wind energy will continue to expand rapidly over the next decade and that, despite large offshore projects, most wind power plants will remain onshore.

In order to meet new demand, wind turbines will continue to grow. Currently, the very largest turbine, built by REPower in Germany, has a 120m hub (the height of the Spire in Dublin) with blades 129m in diameter. The turbine produces 5MW. By comparison, the Arklow Bank turbines installed by Airtricity and General Electric each produce 3.6MW (enough to power somewhere between 500 and 1500 homes assuming the turbine produces, on average, 30% of its rated output). In parallel, windfarms will also grow in size and power output as companies merge and capital investment increases.

Securing the world's electricity supply was another primary theme. Corin Millais, the CEO of EWEA, predicted that by 2030 there will be a 766 GW increase in Europe's demand for electricity. Security in this sense means restructuring the grid and the sources of power to meet this demand and provide a stable, continuous supply. Security of supply can also be thought of in terms of the world's reliance on non-renewable fuels such as oil and gas. As Klaus Rave of Invesitionsbank SH and the Vice-President of EWEA highlighted, 50% of Europe's fuels are imported from countries such as Algeria, Bolivia, Iran, Iraq, Libya, Nigeria, Russia, Sudan and Venezuela. Security of supply is a political, a resource and a technological issue.

Technological limits are currently being met in Spain and Germany as regards their electricity grid infrastructure. The current "legacy" system used in all developed countries does not facilitate the connection of small intermittent power supplies. This model has large centralised power stations as hubs feeding out to a transmission and distribution network. Walt Patterson, an economist with think-tank Chatham House, envisages a distributed network of nodes, rather like an internet for power transmission, with each node free to use power from or supply power to the grid. Combined with short-term forecasts from the power-suppliers, this would tend to stabilise the electricity supply, making black-outs due to power-plant failure increasingly unlikely and allowing very small power companies to supply to the network just as easily as former state monopolies. There was again a consensus that grid re-structuring is essential, an idea re-iterated in the final sessions of the conference.

According to Andrew Garrad of Garrad Hassan and Partners, speaking during a plenary session, modelling and measurement will be key in the future development of wind energy. In terms of resource assessment, the ideal situation would be where you could take a terrain map and turn it into a reasonably accurate wind-speed map. The importance of this subject was further reflected by the fact that an entire scientific session was devoted to improving wind resource assessment. State of the art systems combine real measurements and numerical predictions to varying degrees. The Danish national laboratory, RISØ, has developed such a commercial system. Called WAsP (the Wind Atlas Analysis and Application Program), this seems to be the industry standard at present.

To quote Andrew Garrad again, more modelling and measurement is required to improve wind energy technology. In the closing plenary session Jos Beurskens - of the Energy research Centre of the Netherlands (ECN) and The European Academy of Wind Energy (EAWE)- commented that wind energy research is now beginning to influence the field of aerodynamics and computational fluid dynamics modelling. Many of the scientific and technical presentations involved simulation of airflow and/or system mechanics.

I attended sessions marked with an asterisk. In addition, I was in attendance at the poster session and plenary sessions.

Aside from major turbine manufacturers (such as General Electric, Vestas, Bonus and Ecotecnia), developers (power generation companies; such as Airtricity), there were a large number of component suppliers and various service industries. Of interest were the few modelling and resource assessment companies: Fluidyn, AWS Truewind, Windsim (by Vector), Casandra Energy Services and WindPro.

The poster themes, ordered according to the number of posters presented in each, were: 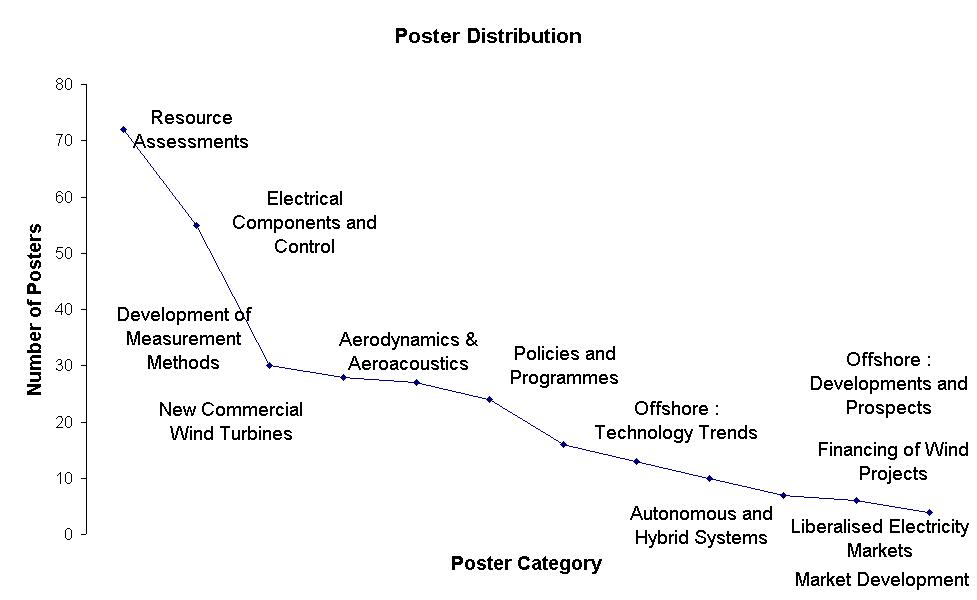 The Institute for Numerical Computation and Analysis part funded my attendance.