Is Germany In a Mess (Because of Renewables)?

Is Germany in a mess because of renewables? Taking a long view, the opposite seems probable - it will be in good shape.

This question is topical because recently it's been argued that Germany really is in a mess because of renewables and that Ireland had best pay heed and stick with gas. Well, to take it from from the top ...

Climate change is happening. Adjusting will be expensive. Taking steps to reduce our contribution to climate change makes sense for our own future. Additionally, if wealthy countries do not take a lead, who will?

Mitigating the worst effects of climate change involves doing many things. The first, and easiest, of these is to transition to sustainable energy sources that do not emit greenhouse gases. i.e. hydro-, wind, solar and ocean/tidal.

Natural gas is not an environmentally friendly fuel. It is less damaging than oil or coal, but this is not saying a lot.

Gas will run out and perhaps faster is commonly believed. Short-term price fluctuations do not reflect this reality. At present, renewables are the only non-nuclear alternative to the fossil fuels. (Although, if nuclear fusion happens, this will change everything.)

Oil, gas and coal reserves often belong to other people and are increasingly hard to access.

Keeping our grid powered, our lights on, is called ensuring security of supply.

Energy policy is designed with these things in mind.

A robust energy system will be decentralised, interlinked and will utilise renewable sources where at all possible.

With FIT, the capital costs involved in transitioning to a distributed, renewable grid is partially offset for utilities by increasing the cost of electricity to the end user.

FITs are an effective means of encouraging adoption of new technology. Just as special taxes can have the opposite effect, e.g. cigarette taxes and the young.

At the same time, feed-in tariffs are a type of regressive tax, involving the transfer of money from ordinary people to the wealthy. For this reason, they ought to be used carefully.

Germany is a pioneer in the use of FITs. By offering generous subsidies to utilities, it has initiated a rapid transition to renewable energy, or Energiewende.

The German tariff is structured so that early renewable installations received a higher tariff for a fixed period than those installed later. In the future, new systems will receive no subsidy at all.

For this reason, after a period of time, the feed-in tariff, usually paid for by the end customer, will begin to fall and eventually disappear, i.e. the relative increased cost of electricity to the end customer is temporary.

The end-point, it is planned, will be a robust, decentralised, renewable energy-based, grid, insulated from fossil fuel price fluctuations, providing electricity at a price to the end customer that's cheaper than the fossil fuel alternative.

Countries that do not move towared renewable technologies will be left exposed to the instability of fossil fuel prices and will continue to contribute to climate change.

Germany has already made significant progress, with 27% of electricity production coming from renewables.

There are, of course, problems with the implementation, including a perception of unfairness in how the FIT is levied - many large firms are exempt - and some uncertainty in its future development.

The rapid transition has disrupted the business model followed by the large utilities, naturally resulting in some resistance. Nevertheless, E.ON's recent split into two companies, one focused on renewables, the other on legacy fuels, seems to indicate that utilities see the future as renewable.

As the wholesale price of electricity has decreased, due to increased renewable penetration, utilities have switched their base-load fuel of choice to coal rather than gas: it's cheaper. This is an unintended consequence; coal power plants emit more CO2 than gas plants.

Though this use of coal is a real concern, as more renewables come online, less coal and other fossil fuels will be used. If a real carbon tax is introduced, this problem will be quickly resolved.

It seems to be working. It's nice to demonstrate things for yourself and so I built a toy German electricity economy in Python. 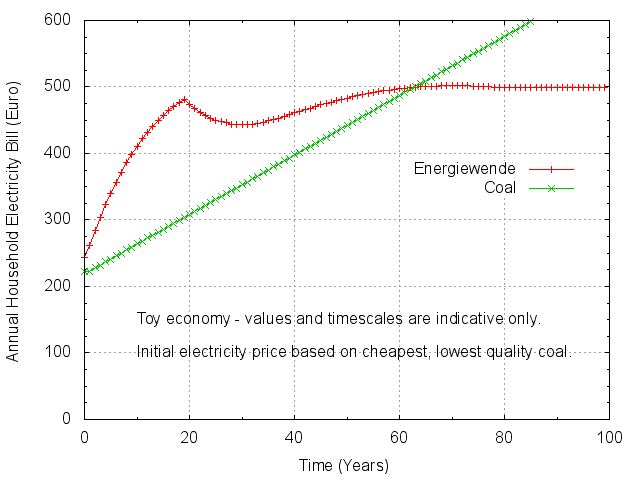 The end point is a cheaper, secure and clean grid. An important point to note is that the model is probably conservative. Wind can be a good deal cheaper in many places and coal may become a good deal more expensive. Aside from an increase in coal cost, the instability of the coal price is important in real life. In Germany, the wholesale price of electricity has fallen significantly as a result of the country's strategic shift to renewables.

In Ireland, two-thirds of the recent increase in electricity cost was to spare utilities some of the structural costs associated with attempting to ensure security of supply. This Public Service Obligation is an amount of money raised directly from end customers. The breakdown of where this money goes to is here. About a quarter was used to finance the renewable energy feed-in tariff (REFIT), the extra payment for renewable generation, including wind.

The remaining third was added by the utilities.

It's important to note that the legislative part of the increase had been planned for some time; it wasn't a surprise.

Ireland has a high proportion of households living in the countryside. All the cable and equipment needed for this, together with a high cost of labour, means that our network charges are also high.

This, together with the cost of fuel, is the main technical reason that our electricity prices are a little higher than the EU average. There is, of course, the question of competition and margins but eventually these concerns ought to be taken care of by political means.

Security of supply is an acute issue for Ireland and we need to pay to fix it. The country is at the end of a long gas pipeline. At present, we have up to a week of back-up energy supply, in the form of oil, in the event of a cut-off.

Aside from the helping to mitigate climate change - we have a responsibility to future generations to avoid calamity - switching to a distributed, renewable, grid will stop price fluctuations and minimise the risk of disruption associated with our energy supply.

PS: There is a good article in the Irish Times today - January 27th - about Irish energy prices.