Some Thoughts About the Donegal V52 Failure

Some analysis based on news reports and photographs.

Last week a Vestas V52 collapsed in Donegal. From published photographs, it appears that the tower failed either at the base or close to the base. This is extremely unusual, and it is difficult to find examples of similar failures. There have been more than 3700 V52s installed worldwide. Vestas, the manufacturer, will conduct an investigation and until it is completed, the cause of the failure is uncertain.

Some consideration of the possibilities, however, may be instructive and useful. Not least because we have a V52 on campus at DkIT. With the facts to hand, what can we say?

First of all, at 25 m/s, the reported peak wind speeds in Donegal around the time of the failure (see also Weather Underground) were not all that high in design terms. 25 m/s is a fresh gale; it is also the V52's shut-down wind speed. When the average wind speed exceeds 25 m/s for a short period of time, the V52 will park itself in a safe configuration, waiting until the wind speed drops.

The V52 tower is tubular and made of steel. At the base, the outside diameter is 4 m. Knowing that the tower weight is between 70 tonnes and 110 tonnes, for a nominal height of 60 m (the actual height will have been something close to this), and a steel density of around 7850 kg m-3, we can say that the wall thickness of the tower is greater than 1.5 cm (by figuring out how much the volume of steel in the tower ought to weigh). From photographs, the Donegal V52 tower failed at or very close to the foundations. Although the failure is surprising, the point of failure is not so much: the maximum bending moment occurs at the base. The tower is a lever, amplifying the rotor thrust force that acts at the top. This amplification is greatest at the base, where the tower is anchored.

With a little mechanical engineering, which you can work through yourself, you can figure out that a tubular S355 steel tower, of outside diameter 4 m and a conservative wall thickness of 1.5 cm, can tolerate a 66,166,876 Nm bending moment at its base. This is approximate, of course. A bending moment is a force (thrust) by a distance (height of tower). If we divide the maximum bending moment by the height of the tower, i.e. ~60 m, we get the maximum force, parallel to the ground, that the tower can tolerate. This falls out as 1,102,781 N. So, all things being equal, this idealisation of a V52 tower will tolerate about 1.1 MN before failing at the base.

The question then becomes, what thrust force will the V52 experience at 25 m/s? The thrust force is the force, parallel to the ground, that pushes on the rotor. Since the rotor is attached to the hub, this acts at the top of the tower. Using a technique called blade element/momentum analysis, you can figure out that the machine will be subject to a thrust of somewhere close to 100,000 N, i.e. 0.10 MN, just before it shuts down at 25 m/s. I'm assuming that the machine is operating normally, i.e. that the controller and control systems are functioning as intended.

This is less than 10% of the tower's capacity. So, if everything is normal, the tower will be more than well able to handle the load at around 25 m/s. In a properly installed, well maintained machine, this will be the situation.

So, what about the very unlikely case that the V52's safety systems completely malfunctioned and the machine was operating out of control? Well, this is improbable as the V52 is built to fail safely. Nevertheless, not bound by probability, we can imagine a V52 operating completely out of control in power generation blade configuration, with the generator disconnected, in a state referred to as overspeed. Using the model, we can say that in a wind speed of 25 m/s, the thrust force acting on the rotor would be around 445,000 N, i.e. 0.45 MN. So even in this imagined worst-case situation, this tower will still only experience not even a half of its theoretical capacity! It simply won't fail.

Repeating the calculations for a tower wall thickness of 1 cm, the maximum tolerable thrust is 737,952 N. Nevertheless, in the worst-case scenario, the thrust at 25 m/s is only 60% of the tower's capacity. Still no failure.

In fact, in this worst-case scenario, almost all the other components will start to fall apart long before the tower. You can see a recorded example of a large system failing in this way online; note how the tower does not fail before the blade strike - this 2008 control system failure was unique and the result of an unfortunate sequence of events. The wind speeds in East Jutland on February 22nd 2008 were a little higher than the wind speeds near Maas in Donegal on Friday March 21st. The Nordtank 600 kW (43 m) machine is smaller than the V52 and of different design. At the same time, the behaviour of the turbine in overspeed is instructive. 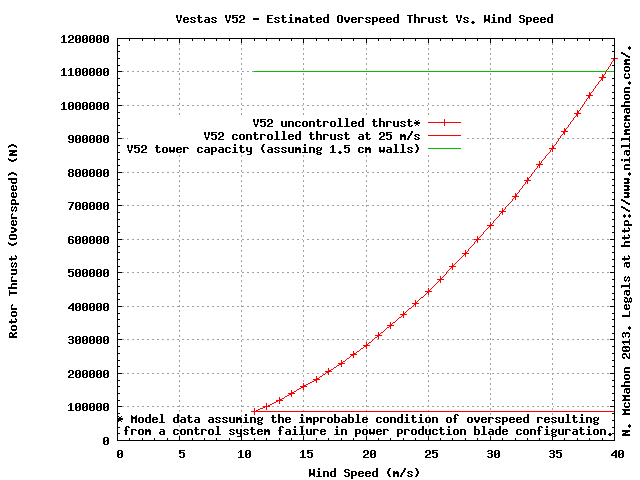 Summary of the analysis outlined.

So, what happened in Donegal? For the wind speeds reported, it seems strange that a well-installed, normal V52 tower could collapse. Possible causes include, of course, an installation error or a manufacturing flaw in the tower.

The investigation into the failure alone will determine its cause; all these figures are estimates only. The usual cautions apply.

Update: in October 2013, Vestas concluded that the failure was caused by the pitch system failing unsafely. At least one blade failed to pitch correctly out of the wind, apprently resulting in overspeed, as described above. The tower failed after a blade strike, in the same way that the Nordtank machine failed. Two things: (i) other components fail in overspeed before the tower does; (ii) once a tower is damaged, its load capacity is compromised. Niall.